Travelling on a chessboard

As I have already mentioned, chess began to play an increasingly important role in my life from the last few years of primary school onwards. The black and white chequered board turned out to be a doorway into a wider world. Before long, I was participating in tournaments in Belgium and abroad, usually as an individual player but sometimes also as a member of a local or national team. While I was at secondary school, hardly a weekend or holiday went by without me travelling to some competition or other. Chess took me to all kinds of places in Belgium at an early age, and also all over Western Europe and to the Czech Republic, Poland, Spain and Turkey.

How does someone who can’t see play chess? By using a specially adapted board: every square has a hole in it and every piece has a peg on the underside. Because the pieces can be fitted into the holes, they are much more stable than the ones on an ordinary chess board. To distinguish the colours, the black squares are raised a bit higher than the white ones, and the black pieces are marked with a little pin. This allows a visually impaired player to get a good overview of the placing of the pieces on the board by touch. To make sure the players do not get in each other’s way, we always play on two boards and the players tell each other what move they have made by naming the coordinates (these are the letter and number combinations for each square, for example pawn d2-d4 or knight g8-f6). Incidentally, as the skill of the visually impaired player increases and he or she learns to remember positions on the board exactly, touch is used less and less. After all, chess is mainly an intellectual game: analysing the current situation, predicting future scenarios and calculating all the possible variations.

Without a doubt, playing chess has helped me to develop essential skills and interests. To begin with, it taught me structured reasoning, decision-making under pressure of time and how to stay focused for hours. What is more, it gave the insecure adolescent I was at the time the self-confidence I needed to realise that discipline and dedication really do pay off. I was coached by my uncle, Jan Delabie – an excellent player of correspondence chess in his time – who read chess theory into dozens of cassette tapes for me. But I also made great strides by spending countless afternoons practising with friends and poring over chess books together. I constantly went in search of new challenges by taking part in more difficult tournaments or playing against more and more opponents simultaneously, which meant I had to learn to memorise 20 to 25 board positions at the same time.

With hindsight, something at least as important was that playing chess brought me into contact with foreign languages and cultures at a young age. Sitting across a table from someone in complete silence, sometimes for up to five hours, makes you curious to find out about your unknown opponent. Afterwards we usually chatted about the game or told each other anecdotes about famous chess players, but we might just as easily get onto completely different topics. For example, I was deeply affected by what a Serbian opponent told me about the NATO bombardments of Belgrade, the city where he lived, in 1999, and found out all about a Swedish theologian’s research into Coptic Christian manuscripts. But as well as enriching conversations like these, I came away with all kinds of unfamiliar sensations, such as the spicy scents of food and exhilarating dance music coming from clubs and bars in Istanbul, where I took part in the Youth Chess Olympiad when I was fourteen. In short, I was bitten by the travel bug and have been infected by it ever since.

For a few years, my performance got better and better. My gold medal at the Youth World Championship for Blind and Partially Sighted Chess Players in 1999 was what attracted the most media attention, but what was more important to me personally was that I became Belgian champion in the sighted junior category the following year. I preferred ordinary tournaments such as that one, simply because the level of play was higher. Furthermore, of course, chess is one of the few (intellectual) sports in which players with and without a disability can play against each other on an equal basis. Although, once in a blue moon, a sighted opponent might protest at having to play on two boards and announce moves aloud, most people’s reaction to this slightly different way of playing was extremely sporting. In the new millenium, my growing interest in literature gradually took its toll on my active chess playing. But one thing is certain: this ancient game had opened up my horizons. 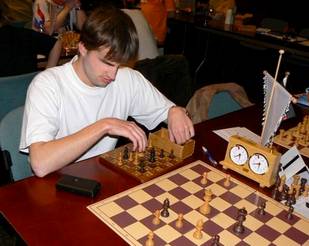